On this day (January 14) in 1968, the Oakland Raiders played the Green Bay Packers in Super Bowl II. As mentioned in my book, A Patch of Ground: Khe Sanh Remembered, I was at the time temporarily assigned to a small Marine outpost in a village two miles from the Khe Sanh Combat Base, so remote that I was beyond the range of the Armed Forces Radio broadcast of the game. Up the road at the combat base, Marines had access to superior radio equipment and were listening to the game. My friend there, Steve Orr, would surreptitiously provide me with clipped voice score updates over our, otherwise, secure base defense radio network.

It was obvious to me by about 5 AM (January 15 in Vietnam) that Oakland would be defeated. At almost precisely that time, exactly a week later, my little unit would be attacked by hundreds of North Vietnamese soldiers. After two days of fighting, we were able to get back to the relative safety of the combat base, abandoning the village and our headquarters compound to the enemy.

But on that January 15 morning, my only problem was an overwhelming sense of homesickness caused by the fact that I had only been in Vietnam for six weeks and would’ve given anything to be sitting in front of the TV in my parents living room watching the game with friends and family.

Coincidentally today, I read this article (link below) about the state-of-the-art opulence offered by Allegiant Stadium in Las Vegas, the Raiders’ new home in the coming season. It took me back to years before 1968, to the year 1960, when the Raiders first came to Oakland as part of the newly founded American Football League. It was an occasion of incredible civic pride for our humble, blue-collar town, that perpetually lived in the shadow of its elegant, urbane and world-famous (Thanks Tony Bennett. Did you even consider for a moment the lyrics: “I left my heart in Oakland”?!!) neighbor, San Francisco; with its well-established big-league football and baseball teams: the 49ers and Giants.

Sure, author Gertrude Stein had once said of Oakland: “There is no there there.” And yes, the town had, at first, wanted to call the team the Oakland Señors, a somewhat less-intimidating name than they later decided upon. And sure, the pirate logo they adopted was grounded in a bit of our town’s history, sort of. Although Oakland’s seaport had not been a haven for the more traditional dangerous, swashbuckling buccaneers, it was home to many nameless “oyster pirates,”--as described by native- son author Jack London—who were actually more like nocturnal, shellfish burglars.

Adding to this embarrassment, the Raiders, like some poor relative, didn’t play a single game in Oakland their first two years, but in much-resented San Francisco, at Kezar Stadium, in Golden Gate Park, or Candlestick, when the haughty 49ers deigned to fit them in.

But none of this magnified our civic inferiority complex, because there was now a professional football team with the word “Oakland” in its name.

I attended my first Raider game when I was 12, at Kezar Stadium in the autumn of 1960. Our parents were able to afford it because if you visited a Safeway store you could get a two-for-one coupon for tickets.  Fans sat on long, concentric rows of ancient, backless, wooden benches, so treacherously sliver-laden that we soon learned the hard way keep our hands in sight at all times.

Running back James D. “Jetstream” Smith was our hero that day, taking handoffs from quarterback, and later Raider legend, Tom Flores. The Raiders starting left guard was Don Manoukian, a Reno High and Stanford graduate, who had been lured away by the Raiders from a lucrative professional wrestling career in Japan, where he was the perennial bad guy called The Great Manouk. In today's NFL, where offensive linemen are more likely to be 6’ 6” and close to 300 pounds,  Don helped anchor the interior of the Raider offensive line at barely  5’ 7”  (listed as 5’9” on the team roster) and 240 pounds. I had the privilege of getting to spend some time with him before he died in 2014 at age 80, and he was unquestionably the finest storyteller I will ever know.

Before moving into their permanent Oakland-Alameda County Coliseum in 1966, the Raiders physically (finally!) arrived in Oakland, playing at a temporary facility called Frank Youell Field, named after the city’s most prominent undertaker.  There, on November 21, 1965, I was one of 19,000 fans watching the Buffalo Bills behind quarterback, and later US Senator, Jack Kemp, defeat Flores’ Raiders 17-14. (Photo: Youell Field 1965, Raiders v Bills) 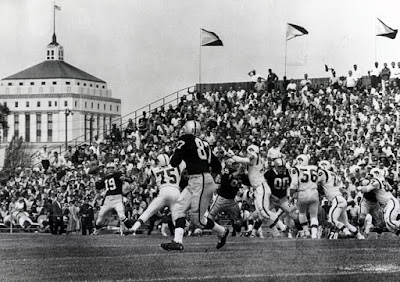 On a dare, one of the loonier members of the group of kids I hung out with then, ran on to the field after the final whistle, snatched Kemp’s helmet out of his hand, and headed for the exit with the Buffalo QB in hot pursuit. The kid won the dare, but the helmet was later returned to the Bills. I later learned that because those pre-merger AFL teams were operating on such razor-thin budgets, players were responsible to pay for any equipment they lost. It would not be the last time a Raider fan, never known for their social decorum and cuddly dispositions, would seek to annoy visiting quarterbacks.

Two Novembers later, I was on my way to Vietnam and upon my return would remain an avid—some might say “rabid”—Raider fan until Al Davis moved the franchise to Los Angeles in 1982, an unthinkable act of disloyalty, only made worse by the traditional disdain which Northern Californians held for anyone choosing to live south of the Tehachapis—home of those much-loathed sports rivals the  Dodgers and, for many years, the Rams--and thus forever tainted by that association.

And so, to all you Las Vegas Raider fans shelling out those exorbitant PSL, ticket and concession costs, feel free to put your hands on that seat next season. I’m guessing you won’t be getting any splinters.

William John Raggio, Jr. was born in Reno, then the picturesque “City of Trembling Leaves,” on  October 30, 1926—just a few hours short o... 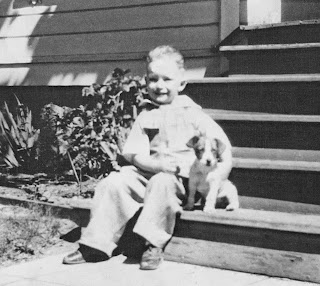